Home/Camera Skills, News, story behind the image/Sony Star Eater? A comparison of Sony A7II Camera Vs Pentax K1
Previous Next

I thought I’d write this article about the Sony star eater issue that is often discussed. I know there are a lot of Sony gear lovers out there and some people who want to enjoy using these cameras for “low light” captures or astrophotos. The Sony star eater debate has been circulating the internet for some time now and I wanted to present my finding regarding this.

I’ve been doing Astrophotography with my Sony A7II for over a year now, and I’ve really been impressed with this camera. But, I got word of the Sony star eater issue shortly after I got the camera.  As someone who wanted to photograph stars with it, I was a bit concerned about this issue of the dreaded Sony star eater. It seemed to be an “issue” with internet forums and there were all sorts of user groups blown up on the internet about it, and read how Sony forces noise reduction algorithm even when its turned “off”, and that the algorithm ate stars from the frames. I continued to use my camera, thinking, “hmmm could or should this be better?” and had an “upgrade” in mind, or wishing Sony would mention that this issue would be fixed through some firmware upgrade or something, or that there was no concern. The issue was apparently present in the instances of a single frame at almost the pixel level with the examples I saw online. But you really really had to drill down to see it. I didn’t see this affecting anything on the Sony A7II camera with the latest firmware update.

For this camera, I feel I can finally put this issue to bed and would like to spread the word that this issue is really not an issue for the Sony A7II. The reason I arrived at this conclusion is because through a rare instance and circumstance, I was able to compare an image I captured with my Sony A7II to someone else’s, a friend of mine, using his Pentax K1, using nearly the same optical equipment, on the same night with the same atmospheric conditions. When looking at these images side by side, I cannot see any Sony star eater anywhere, even if you zoom in and look for it in the tiniest of stars.

This object is a crop of the rosette nebula near Orion, and lots of astrophotographers really like imaging this object. It’s a pretty “Star Nursery” about 5000 light years away.

Here are the stats of this interesting side by side. 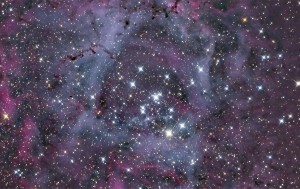 It actually turns out, I was told that the Sony captured the colors “more correctly”  because the region in the sky is OIII and should actually look more blueish instead of reddish.

I hope you enjoyed this comparison, and if you are worried about Astrophotography with a Sony A7II, I believe there is little if nothing to worry about as far as stars disappearing.

About the Author: Mirko

My passion is adventure photography and capturing the beauty of nature near and far. I have been an avid visual astronomer for the past 30 years and have much interest in photographing objects I typically enjoy viewing with an unaided eye, using various telescopes in the darkest skies.  When photographing these objects, I strive to capture the beauty and awe-inspiring vastness of the cosmos.  I use a DSLR, or a cooled CMOS astrophotography camera by ZWO, Sony A7ii.  Telescopic Equipment by Celestron, GSO, Televue, Explorer Scientific