Home/Hints & Tips, News, Photoshop, Software/Increase Contrast in a Colour Image with a Black and White Adjustment Layer
Previous Next

With an image already open in Photoshop, I am going to add the black and white adjustment layer.

Bring back the colour.

This is a quick and simple adjustment.

You will see the colour return to the image and the increase in contrast. If the contrast adjustment is too severe, you can easily dial it back.

Reducing the severity of the black and white adjustment layer

More often than not, this technique will produce an image that has too much contrast in it. To reduce the severity of the effect: –

Adjusting the sliders in the Properties panel

The Properties panel for the black and white adjustment layer has six sliders that adjust the brightness of the corresponding colours in the image. In the picture I have chosen, I am going to use the sliders to darken the sky and lighten the roof tiles. I can also reduce the brightness of the marble face of the cathedral.

The Properties panel provides a lot of extra control over the selective contrast in your image. I find that taking each slider in turn and sliding it fully from left to right while observing the effect on the image, is the best way to determine which adjustments to make. 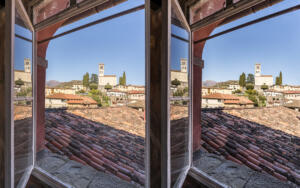 Using a black and white adjustment layer is not an intuitive option for increasing contrast in a colour image. But it is highly effective, and it is a technique I would encourage you to try. Also, try selecting the Overlay and Hard Light blend modes as an alternative. These two blend modes have a more pronounced effect, which can be useful for increasing the appearance of texture in an image. Don’t forget, if the contrast is too strong, you can use the Opacity setting to reduce the intensity.