The New Dodge and Burn Tools in Photoshop

The New Dodge and Burn Tools in Photoshop

Knowing how to dodge and burn in Photoshop is one of those skills that will make your images stand out in the crowd. Photoshop has always had tools for dodging and burning, but they were never perfect. They were so bad that you have probably never used them. If you have used the dodge and burn tools of old, you’ll know how bad they were. Most photographers would have told anyone to keep well away from the dodge and burn tools. The advice was justified and correct, but it’s no longer accurate. Let me explain and demonstrate.

What do the Dodge and Burn tools do in Photoshop?

Simply put, the Dodge and Burn tools will darken (burn) and lighten (dodge) areas of an image. Both the Dodge and Burn tools are brush-based and can be brushed onto any part of an image to darken and lighten specific areas. The process is based on the traditional darkroom technique where the photographer would either block light from reaching the photo paper (dodging) or increase the amount of light reaching areas of the photo paper (burning).

The more you brush over an area with the Dodge and Burn tools in Photoshop, the more pronounced the effect.

The legacy Dodge and Burn tools

In previous versions of Photoshop, the brush-based tools of dodge and burn were useless. The tools promised to lighten (dodge) and darken (burn) targeted tones within the image, but their results were ugly. You would brush the dodge or the burn tool over an area of your image, and it would lighten or darken the pixels. You are also able to tell Photoshop to only pay attention to the highlights, midtones or shadows as you brushed the effect. And, because these tools are brush-based, you also have control over the size, shape, softness and opacity of the brush. This all sounds great. The problem was, it produced ugly results. Let me show you. 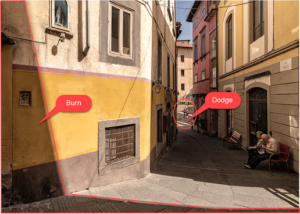 These areas will be dodged and burned.

As you brushed with the legacy Dodge and Burn tools, the effect would increase and destroy the tonal values of the pixels. This tonal destruction led to completely burned-out highlights and completely black shadows. The effect was very difficult to control. This lack of control and pixel destruction spawned many alternative techniques for dodging and burning. These alternative techniques were tricky to learn and could be convoluted. The new Dodge and Burn tools could negate these tricky and convoluted dodging and burning techniques.

Legacy Dodge and Burn tools in use

To gain access to the legacy form of the Dodge and Burn tools, I first unchecked Protect Tones in the options bar. The Protect Tones option is checked by default.

New Dodge and Burn tools in use

The range setting will ensure that the Dodge and Burn tools will only target a specific range of luminance values within the image. For example, if you are using the Burn tool and you have the Range set to Shadows, you will only affect the shadow areas as you brush. The range setting allows you to brush freely without being concerned the effect will spill into neighbouring areas of luminance.