The Ghost of Ross Priory? What’re Your Thoughts?

Home/Camera Skills, News, story behind the image/The Ghost of Ross Priory? What’re Your Thoughts?
Previous Next

The Ghost of Ross Priory? What’re Your Thoughts?

Ross Priory is the ancient house of the Buchanan family and sits on the banks of Loch Lomond. It is a spectacular building that has an equally spectacular view over Loch Lomond. However, does this photograph show that it may be haunted?

One evening in early December, I decided to visit Ross Priory to try some astrophotography shots over Loch Lomond. There was a half moon and my plan was to use the light from the moon to illuminate the snow covering Ben Lomond at the far end of the Loch. However, when I arrived I immediately noticed that there was too much light pollution coming from the lights on Ross Priory. So, rather than just head back home with nothing, I thought I’d take a photograph of Ross Priory. Afterall, I had travelled all that way.

It was an extremely cold night with a north wind cutting right through anyone who got in its path. In Scotland, a north wind usually means that the air will be dry and clear and tonight was proof of that theory. So, my idea for the image was to take a long exposure, about 20 seconds, to allow the clouds to streak across the sky and to give the camera’s sensor time to capture some of the brightest stars. Even with the light pollution, it would still be possible for the camera’s sensor to capture some of the brightest stars. However, the floodlights illuminating Ross Priory were too severe for a 20-second exposure and the details of the sandstone bricks would be overexposed and washed out. So, I decided to take two exposures one bracketed for the floodlit stonework of Ross Priory and another exposure for the sky. I would later blend these two images in Photoshop using a luminosity mask. This resulted in a photograph that was well exposed for both the stonework and for the starry night sky.

The Ghost of Ross Priory?

When I was editing the image in Photoshop, I zoomed in to check the sharpness of the focus and realised that I may have photographed a ghost.

If you look very closely at one of the windows on the top floor, you may just be able to make out a man’s face peering down at me. 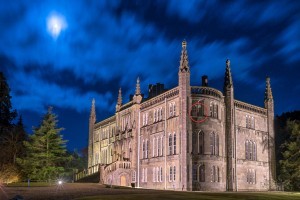 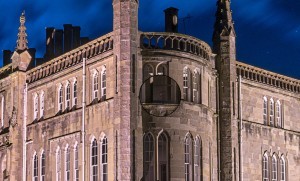 Is it just me? Comment below and let me know if you can see him too.